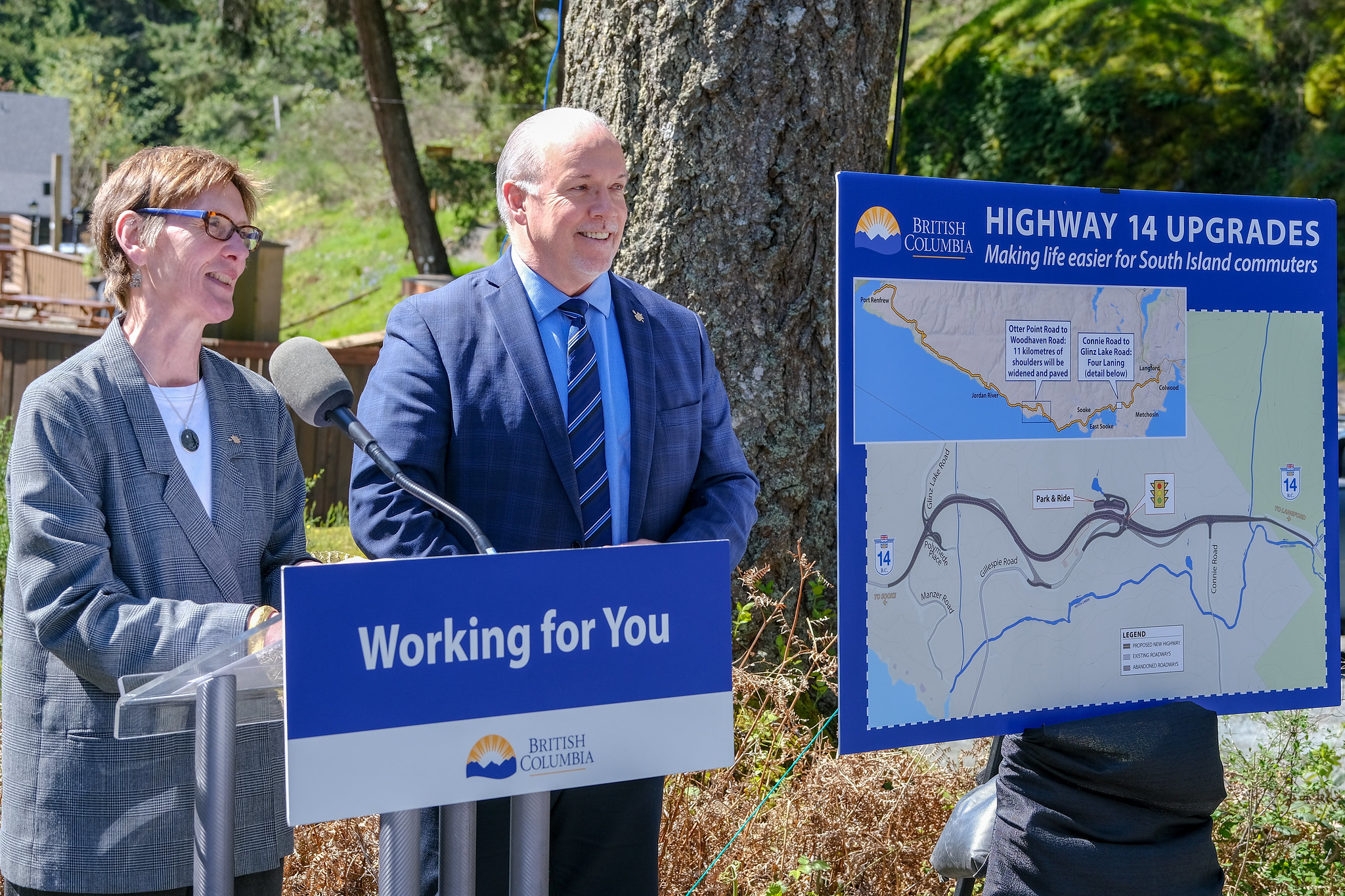 Significant highway improvements in Sooke and Langford on Vancouver Island will soon make the commute safer, faster and more reliable for the thousands who drive, cycle and take transit along these major corridors every day.

Premier John Horgan and Claire Trevena, Minister of Transportation and Infrastructure, announced joint federal and provincial funding for the improvements.

In Sooke, improvements will be made to the Highway 14 corridor along the southern coast of Vancouver Island. Approximately 1.5 kilometres of road will be widened and realigned with a median barrier between Glinz Lake Road and Connie Road, a new park and ride will be constructed on Gillespie Road, and wider shoulders will be built between Otter Point Road and Woodhaven Road.

In Langford, the stretch of Highway 1 between Leigh Road and Westshore Parkway will be widened from three lanes to four and a new median barrier to separate traffic will be added. A new northbound through lane will also be constructed at the Westshore Parkway intersection.

Once complete, these critical corridors will be safer and more efficient for drivers. In Sooke, commuters will also benefit from the ease and convenience of a park and ride facility that will encourage people to use public transit and help reduce harmful emissions caused by gridlock.

“Keeping people and goods moving smoothly is essential to helping our businesses compete and improving Canadians’ quality of life. These vital improvements along highways 1 and 14 on Vancouver Island will greatly reduce the risk of collisions and ensure residents, tourists and businesses can travel safely and efficiently through the region for years to come.”

“These two investments will make the commute safer and more efficient for the thousands of people living in the western communities. We need to build transportation solutions for right now, as well as into the future. That’s why across this province, we are investing in new infrastructure where it is needed, upgrading transit corridors and developing transportation networks to help improve the lives of people who live and work in B.C.”

“We’ve been listening to the concerns of the growing communities of the West Shore that have been asking for improvements to make highways 1 and 14 safer. Our government’s investments in highways, as well as transit and cycling infrastructure, will meet the diverse needs of people travelling on southern Vancouver Island.”